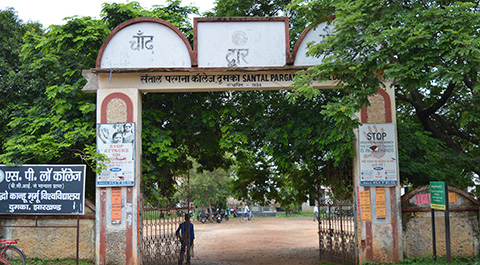 Dumka, a town surrounded by blue-green hills and rising highlands from the edge of its premier river “Mayurakshi”. In 1855, when this tribal land became headquarter of the district, it witnessed several efforts and initiatives towards the education of its people. But the dream of having a quality higher education through an established college became a reality in the year 1955, owing to the selfless efforts of then Deputy Commissioner Late Ujjwal Kumar Ghosh (IAS) and some other education enthusiasts like the then MP Late Lal Hembrom, Late Maheshwar Jha, Late Thakur Prasad Daruka and other local intellectuals. The foundation stone of a college was laid on 2nd September, ensuring a bright future for students from this area.

The college is located on the Dumka-Pakur road, at the distance of two miles from the township. It offers Bachelor’s Degree with ‘Honours’ in 18 subjects and Postgraduate level Master’s Degree in 8 subjects of arts, science and commerce faculty.

Santal Pargana College has been a model college of Bihar University since before 1960 and of Bhagalpur University thereafter. It became a constituent college of Sido Kanhu Murmu University, Dumka on 3rd February, 1993. The educational achievements and discipline of the college made the then Vice Chancellor of Bihar University, Dr. Dukhan Ram to declare it an ideal college. Dr. Zakir Hussain has admired the academic environment of the college many times showering it with compliments such as “गुदड़ी के लाल” (a diamond in the rags). In the year 1975, it was declared as an affiliated college. The college celebrated its Silver Jubilee in 1976 and its Golden Jubilee on 19th May, 2005. Situated on the quiet circuit of nature, this college not only fulfills the educational needs of the area, but has also attracted concerned students, consistently from all areas of the province, through its achievements.

The college is spread out over 37 acres of land, on both sides of Dumka-Pakur main road. Being situated far away from the maddening crowd of the township, the college is well-known for its splendid environment, brilliant education and calm surroundings. The college has tweleve welfare hostels - one general, six for ST students, three for SC students, one for girls and one minority hostel which provide comfortable residence to the scholars.

During 1996-1997 sessions, Shri Parmeshwar Kumar Agrawal (Member of Rajya Sabha) and Shri Shibu Soren (Member of Lok Sabha) donated considerable amounts from their own funds, for the development of the college. With the help of district administration, the constructions of college boundary walls, examination hall, and research centre for Santali language were successfully completed. The main gate of the college is christened as “Chand Bhairo Dwar” and the front gate of the university as “Lal Hembrom Memorial”, as a tribute to the legends. Also, the gate near examination hall is stated as “Chai Champa Dwar”, in memory of the glorious cultural history of the tribals. A life-size statue of Late Lal Hembrom has been established on the college campus.

Year 2001 holds significant importance in the history of the college because; in this very year the study centre of IGNOU (Indira Gandhi National Open University) was opened here. The 2003-04 sessions came with fresh presents for the college. It was during this session that the Jharkhand Academic Council gave permission to begin the study of commerce in college. Also, the college administration made every department of Science faculty fully computerized following the adoption of new syllabus from University Grant Commission (UGC). Presently the college offers various professional programmes including B.Ed, BCA, BBA and LLB.

The learners of this college have always experienced a strong satisfaction and glory for being connected to this college and will continue to do so in the future.